I read recently, that law enforcement agencies in several states were quite upset about the apparently overt use of Craigslist for all manner of debauchery - but specifically for the advertising and solicitation of prostitution.
Now personally, I've always liked Craigslist. Not specifically because of its 21st century approach to the world's oldest profession, but generally because it seems to be a very efficient market and a convenient forum for bringing local buyers and sellers into contact. It was through a Craigslist ad that I found two of my motorcycles. One I bought two summers ago, and then subsequently sold last summer to acquire another I'd found on Craigslist (although I've regretted that second transaction ever since). Also, the site provides an interesting and seemingly anonymous forum for people to speak their minds - occasionally with hysterical results. All in all, I've been a Craigslist fan. But now, I'm starting to think that the apoplectic attorneys general may actually have a point. This is a forum most foul.
Three days ago, I was scanning the free items that were posted in the local Craigslist site. About halfway down the first page, something caught my eye: fleece. Specifically, the raw fleece from eight sheep. According to the posting, the owner simply wanted to get rid of the stuff. This was quite a conundrum.
For several weeks, I'd been considering buying a spinning wheel from my friend S ("SoD") K. She'd bought it some years before, and had lost interest in spinning (although she still knits like a Scandihoovian fiend). The price was good, and I was sorely tempted. I'd even gone so far as to make inquiries of a few local farms as to whether they ever sold their fleece. So far, I'd struck out on those inquiries - but that was OK because it meant I had a good excuse not to get the wheel - thereby hurtling myself headlong into a another series of projects.
But now, with fleece seemingly throwing itself at me like I can only imagine is the case for the ladies (and gentlemen, no doubt) of the evening on a different portion of the site. . . well what was a fellow to do?
I responded to the post. All was not yet lost. "Maybe they'll already be taken."
They weren't already taken. The nice lady who answered my email told me that she'd received a number of inquiries, and was thinking of dividing it up among those who'd responded. She gave me her address, and I told her I'd swing by that evening.
So, the entire TSMK clan piled into the car that night, and made its way out to the farm - which was only about 10 miles from our house. When we arrived, there were piles of plastic bags - the kind you might use to line an enormous trash can - covering most of the front walk. Each bag was stuffed to the brim wit 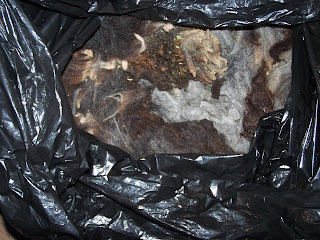 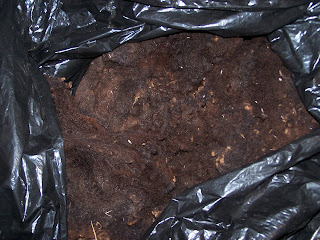 We chatted briefly, and she told me that there was only one other person who was coming, and that I should take half the bags. A quick scan told me that half the bags on the walk wouldn't all fit in the car. So, we opted for three. Three bags full. 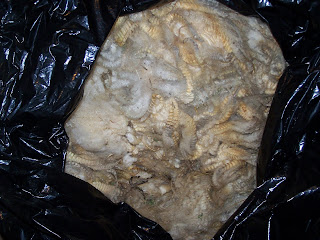 One of the bags is filled with creamy white virgin lambswool. A second is filled with fleece that is almost entirely black. The last has variegated wool ranging from graphite in color to a dark brown. Even raw, greasy from lanolin, reeking of sheep and riddled with all manner of vegetable matter, dirt and unmentionable detritus, this is gorgeous stuff. 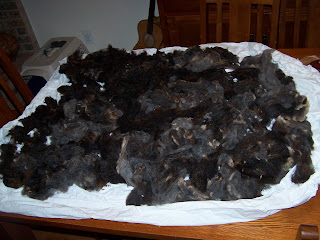 Maybe this is the right time to mention that I do not know anything about processing wool or spinning. I plan to pick up the wheel this weekend. In the meantime, I have begun processing the fleece. I picked as much of the plants (etc.) out of about 1/3 of one of the bags, and washed that portion. At the moment, it's drying on Mrs. TSMK's dining room table. She says it looks like the most impressive "Furminator" commercial you could imagine. (http://www.furminator.com/) In addition, I've picked up some hand carders and have begun practicing. The Youtube videos make it look very easy. (http://www.youtube.com/watch?v=Zp_fIc5lCuk) They lie. It isn't easy. Still, I think it will come with practice. 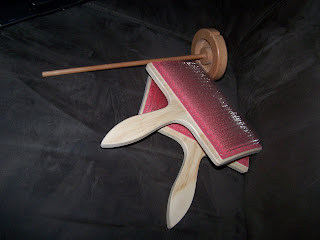 Then, of course, there's the actual spinning. I've played a bit with a top whorl drop spindle, with mixed results. Youtube exhibitionists notwithstanding, I'm thinking about taking a lesson. Maybe I can find someone to teach me on Craigslist. . .