Hello, my name is Django MacDougall

As regular readers will know, music plays a significant role in the TSMK household. So much so in fact, that some of us - while no doubt under the influence of Euterpe – will forget to wear clothes.

We’ve yet to come across a mu 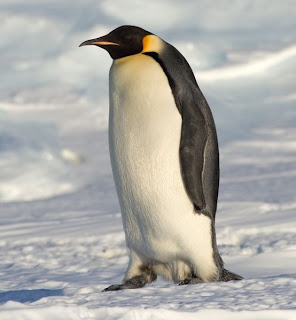 sical genre that wasn’t liked by at least one member of the family. My tastes are all over the proverbial map and, actually, if they were to be plotted on a map I think I’d be able to identify at least one favorite artist or style from six continents, and many regions within. I say six not because I’ve affirmatively ruled out Antarctica, but rather because I don’t think I’ve yet come across any music from that area. Who knows - one day I may hear a recording of some particularly syncopated stylings from a group of Aptenodytes forsteri and then I’ll be able to claim victory on all seven. 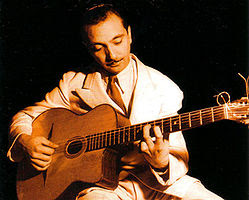 One of my long favorites is gypsy jazz. I can listen to recordings of Stéphane Grappelli, Django Reinhardt and the like for hours on end. It makes great accompaniment for knitting, reading, playing with the kids, enjoying a hand-rolled cigar or drinking a fine glass of just about anything. My only trouble with the genre is that it makes me somewhat inadequate. For most of his career, Reinhardt had the full use of only three fingers (well, two fingers and a thumb) on his left hand. And yet his fretwork is lithe, fluid and blindingly fast. I have full function of all my fingers, but can’t play the transcriptions of his solos (although I don’t play guitar to pay the bills – I might be better if that was my day job. Alternatively, I might starve).

Although I will concede that it doesn’t make for terribly good music to knit by, I also enjoy bagpipe music. I’m not sure why. Perhaps my affinity for the bagpipes is linked to whatever genetic flaw causes me to also enjoy the banjo. In any event, my love of the pipes is one which is unshared by Mrs. TSMK or, indeed, by my two oldest boys. It’s too to say whether the baby likes the pipes – but I’m telling myself that he will. The dogs seem something between noncommittal and outwardly hostile toward the music. The cat is aloof. 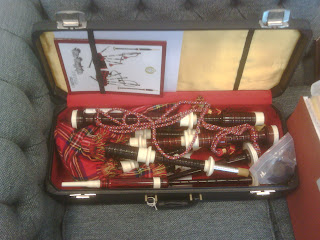 So with all that being said, I’m pleased to report that on Christmas morning, I rushed downstairs with the children to see what Santa might have brought. This year, Santa brought the children and Mrs. TSMK a number of nice gifts. But he saved the best (in my opinion) for me: a set of highland pipes, a practice chanter, and an instructional book with accompanying DVD. I was in heaven. Mrs. TSMK – not so much – but she is being a good sport.


To accompany the pipes, and yet tip my cap to my enjoyment of gypsy jazz and its predominantly French influence, I decided I needed a new hat. So I looked through some beret patterns, as well as some patterns for tam 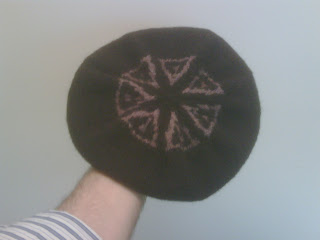 s, and came up with my own design. Here it is in all its glory. It was a quick knit – started on Friday night and finished Sunday morning. I used Cascade 220 for both colors – and then felted it very slightly.


Santa wasn’t the only one who was good to me on Christmas, however, I also received some wonderful knitting stuff from Mrs. TSMK and the kids. Two hanks (one shown) of Plucky Knitter 8-ply cashmere in a light blue, one hank of Plucky Knitter lace weight 50/50 silk/merino (700+ yds!) in a wine color and two hanks (one shown) of Jade Sapphire hand sp 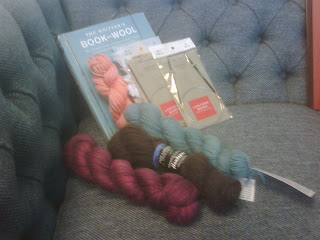 un Mongolian Cashmere in "Kelp". Plus, a set of ebony circulars and a set of rosewood circulars, and an awesome new book: The Knitter’s Book of Wool by Clara Parks. Now what to make. . .?

Double-point bamboo
dangles from the working edge
threatens to escape

Gossamer laceweight
Yarn over, decrease, yarn over
Columns form in thread
Posted by TSMK at 9:03 AM 3 comments:

And I’m not even close to finished with my projects. This isn’t new, mind you. Last year I spent a good portion of Christmas Eve trying to finish a Clapotis for Mrs. TSMK. This year, however, I’ve taken on a few more projects, and would really prefer not to be finishing up at the last minute.

So where do things stand?

Well, I have finished two projects, have two on the needles, and have two that I haven’t yet started. Of the two currently in process, one will go quickly. The other, well, not so much. A back of the envelope calculation suggests that I have around 26,000 stitches remaining for that one. I can get it done in time, but if I’m going to get them all done in time, I may need to give up on sleep and matters of general hygiene. At the moment, all of the activity, with relatively little progress, is making me feel a bit like the following fellows, who I managed to spy while picking up brine shrimp to prevent our C. Frontosa from demonstrating their bulimic tendencies:

One thing I’m unable to give up is my proclivity toward haiku, which I often construct while knitting. With that in mind, I offer the following:

Serene enjoyment.
Each stitch a meditation
of life, love and wool.

The Christmas present
slowly slips from my needles.
I need more coffee.

Clicking Addi nines
morph mohair into fabric.
Will she like the gift?