Ann from the Midwest.

Nope. Not Ann. Which isn’t to say that she didn’t put in a great entry. In fact, her entry was quite persuasive. But there was a problem with it. A big problem. A problem that, on principle, I’m not prepared to accommodate. For you see, Ann wanted to use her present early. Three days early to be specific. Anyway, before I tell you more about Ann, let me tell you about the second most beautiful woman I’ve ever met.

It was slightly more than nine years ago (nine years and three days, to be exact) – that our destines began to converge. It was night. I was sleeping. I do that sometimes. But on that particular night my sleep was interrupted. The darkness of my room was shattered and there, backlit by a blinding light, stood Mrs. TSMK.

“I think my water just broke”.

But when you’re a soon-to-be-first-time father, and you hear something like that in the middle of the night… boy it wakes you up in a hurry.

Despite all the childbirth classes and books we’d devoured over the last several months, the level of uncertainty in this announcement was something I hadn’t anticipated.

“What do you mean, you think your water just broke?”

A lengthy discussion followed which you, gentlereader, will be spared for reasons of its graphic content.

With trembling digits, we called the obstetrician to inquire of recommended next steps. Mrs. TSMK did not seem to be in active labor and, it being the small hours of the morning, we were recommended to come in on the first ferry from Bainbridge Island to Seattle – where we planned to deliver. That ferry was set to sail at 4:45 a.m. – roughly four hours away.

Satisfied that we’d made a plan – and that we were likely to have a rather eventful day – I asked Mrs. TSMK if there was anything that I might do to make her more comfortable.

And so, dutiful expectant father drove to the grocery store, bleary-eyed but hypervigilant, to acquire the particular brand of juice which had recently become her favorite.

Roughly 30 minutes later, I arrived back home. I turned my key in the lock, opened the door, and noticed something new. Something I’d not heard before: an oddly vigorous chuffing noise coming from upstairs. As if someone was panting. Loudly.

The ferry wasn’t set to depart for three more hours. But apparently, Mrs. TSMK wasn’t prepared to wait to begin the day’s festivities.

Fast forward three hours. We’ve been doing our best to remember every breathing childbirth technique we learned in the class. We’re actually doing reasonably well with them – but things are getting more intense with every contraction. We’re on the ferry, but sitting in the car is too uncomfortable for Mrs. TSMK – so we’re walking around on the car deck. Ferry workers are peering at us from around corners. They’re wondering whether they’re going to begin the second run of the morning already behind schedule due to a medical emergency. I’m wondering the same.

We drive off the ferry in Seattle, and I manage to hit every pothole over the 15 blocks or so to the hospital. Moments after arrival in the triage area of the obstetrics unit, Mrs. TSMK is wisely beginning to believe that better living may be achievable through modern chemistry. Her prior (and in my opinion, unnatural) insistence on natural childbirth is beginning to wane. And that’s when the nurse made the call.

Moments later, it happened. I met the second most beautiful woman in the world. Her name was Betty and she was a leggy redheaded supermodel disguised as a short Asian woman. She strode into the room with an air of confidence and, without hesitation, drove a needle into Mrs. TSMK’s back. Within moments, the sun rose in the sky. Birds began to sing and little children of every race and creed all over the earth began to hold hands and sing. Mrs. TSMK was no longer in pain. The world was a better place.

She rested and slept. And just a few hours later, I was a dad. It was, without question, the scariest and best day of my life.

So what does that have to do with Ann? Well, since that day nine years and three days ago, I’ve had the chance to have similar days on two occasions. And each time I’ve been struck by the kindness and compassion of the people who have been part of those days. Ann? Well, Ann is getting ready to do this for the 7th time! And Ann has developed a penchant for wearing brightly colored socks into the delivery room. She is due on December 22, and asked if she might receive a Christmas present of some such socks. 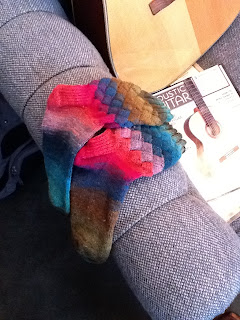 But I can’t allow Ann to win – because we have a hard and fast rule in our family that no one – for any reason – is permitted to open a single present before Christmas Eve. Now, if she was prepared to delay her delivery until the 24th, I could probably make an exception. But these things aren’t always possible – there could be no guarantee.
And so, Ann can’t win. But I couldn’t just leave her hanging either. And so, Ann, I’ve made you your socks. Here they are – knitted from Noro Kureyon yarn with an entrelac leg. I hope they’re colorful enough for you. And I hope that they give you some measure of comfort as you welcome your child into the world. Give him or her my best.
As for the winners – well, I’ve picked them out as well. I got a lot of wonderful entries and requests and, like with most of these giveaways, it was hard to pick who would win. But someone has to – and there were two entries in particular that grabbed me.

Carmen – you sent me a photo of Emma, who will celebrate her first birthday a few weeks before Christmas – and asked for a pair of hand-knit slippers. Well seeing as I’m the father of three boys, I don’t often get the chance to make things for little girls. I’m seizing the opportunity. Now to pick out a pattern.

Jessy – you sent me a limerick about how you give away everything you make and don’t have much handknit of your own. It was funny and made me laugh. But then I noticed a small tag at the bottom of your email. I followed the link, and it took me to your team page where you raise money for the March of Dimes. Good deeds should be recognized. Thank you for all your hard work. You didn’t tell me what you wanted for Christmas, but I’d like to make you something anyway. I’ll come up with a few ideas and run them past you to get your approval.