It is been some time since my last post.  Let me fill you in on the details of the last several weeks.


First, I’ve been experimenting with gravity.  As it turns out, heavy things tend, when unsupported, to fall toward the center of the Earth.  Now, I know what you’re thinking.  You’re thinking that light things too tend to fall toward the center of the Earth.  And you’re right.  But they do fall less spectacularly.  So, if for example you were to drop the left rear of a late 90s SUV off of a floor jack and have it hit the ground within inches of you – that would be pretty spectacular.  Yep.  Gravity is serious business. 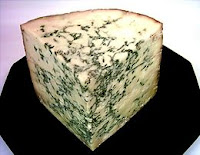 On what I assure you is a completely unrelated note, I was out of knitting commission for a while.  It turns out that it is difficult to knit with a cast-type-thing on your hand.  Almost as difficult as it is to determine whether you’ve broken your scaphoid bone after multiple x-rays.  But not nearly so difficult as keeping yourself from sniffing the cast.   If I could ask The Echidna one thing, it would be why I find myself compelled to smell something even after I know it is noxious.  Whether it be the dog’s feet or a slab of Stilton, my nose is ready for duty.


Having divested myself of my foul-smelling accessory, I returned to the task of making auction items for our recent food-bank fundraiser.  The next item on the list was a sweater requested for Leo, the son of a co-worker.  Specifically, Steggie.  I was more than pleased to do this, as I’ve always liked the pattern.  In fact, I suspect I’d wear this sweater myself if I could find or make it in the right size.

I was given free rein to choose the colors, which led to an interesting philosophical question: would dinosaurs wear purple?  So-called scientists would have us believe that dinosaurs ultimately turned into birds.  And I’ve seen birds with some crazy plumage.  But I can’t say that I’ve ever personally seen a bird sporting purple feathers.  Ultimately, I concluded that dinosaurs must have been willing to wear purple.  How else could you explain Barney?


So here it is, Leo’s Steggie.  It is largely identical to the pattern, but with a slight variation on the plumage of the hood. 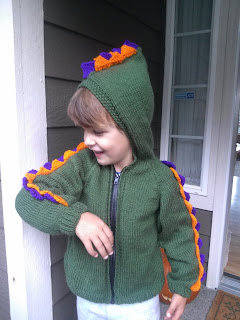 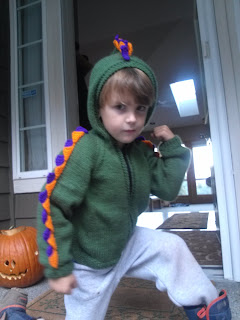