Dogs and Lace - A story of canine betrayal.

One of my current projects is a lace shawl from Nancy Bush's excellent book: Knitted Lace of Estonia: Techniques, Patterns and Traditions (available here: http://www.amazon.com/Knitted-Lace-Estonia-Techniques-Traditions/dp/1596680539). The piece has a peacock feather motif, with a nupp in the center of each of the feathers. I'm working it in a two-ply lace weight silk, and although I've started over a few times, I've been generally pleased with my progress. Unfortunately, however, it looks like I'll be starting it again.

Last night, I spent the evening sitting in a recliner in the living room, with son #3 (age 4 weeks) resting against my chest, working on the shawl. As the evening wore on, and my son's breathing turned to a tiny snore, I got sleepy. I put down the knitting, put the boy to bed, and then put myself to bed.

This evening, I went to look for the knitting, only to find it missing. Mrs. TSMK saw me searching, and asked what was wrong. When I mentioned my knitting, she grimaced. Apparently, one of TMSK's dogs found the knitting earlier today. Mrs. TSMK caught him running downstairs, ball of yarn in his mouth, trailing a sodden, dog-saliva-covered six inches of mangled lace. Oh well. Start again (and remember to put the knitting up and out of reach next time). 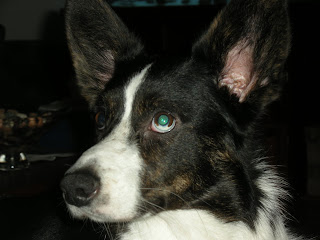 The culprit:
Posted by TSMK at 9:46 PM No comments:

Have you ever tried to make something for someone that lives in your own house without them knowing about it? This happened to me late last November.

I wandered into my local yarn shop (Churchmouse Yarns & Teas on Bainbridge Island - fantastic shop and highly recommended), and hunted around for ideas. I wanted to make Mrs. TSMK a Christmas gift, but hadn't decided on the item. One of the shop samples caught my eye. It was a really nice shawl with a drop stitch pattern. After chatting a bit with one of the ladies in the shop, I learned that it was a called a Clapotis (pattern here: http://www.knitty.com/ISSUEfall04/PATTclapotis.html) - done in Misti Alpaca handpainted baby suri silk. This, I thought, would be something Mrs. TSMK would enjoy. I picked out some yarn, went home and surreptitiously printed out the pattern, and hid yarn and pattern away from prying eyes.


Christmas was a short four weeks away, and I needed to move fast. I carried the project with me every work day, knitting as possible on the ferry and at lunch in a quiet (read: deserted) coffeeshop blocks from my office. Every weekend, I would disappear to "run errands," always ending up either at Churchmouse or some other local spot where I could knit. Every night, I patiently waited for Mrs. TSMK to get sleepy so that she would wander upstairs to bed, allowing me to work on the gift undisturbed.


Gradually, I began to panic. The pattern isn't especially complicated, but it is a lot of knitting. Mrs. TSMK started asking me why I wasn't coming to bed until the early hours of the morning. She began trying to sit up later every evening, so that we might have some time together without the kids. I countered by controlling the remote control and turning to the most boring, sleep-inducing programs I could find. On December 22, just before midnight, I knit the last stitch.

The next morning, on the ferry, disaster revealed itself. I had failed to drop a critical stitch, about 3 inches from the end of the piece. I was crushed. I searched around for advice from knitting friends, as well as the Churchmouse staff. I looked on Ravelry for suggestions from anyone who might have committed this sin before. There was unanimous agreement that the only true way to fix it, was to rip back to the mistake, and reknit. And so that's what I did. I finished the piece, wrapped it and put it under the tree for Mrs. TSMK at around 1:00 a.m. on Christmas morning. -TSMK 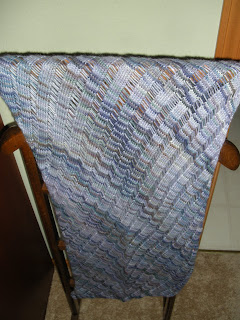 Here is the finished product:
Posted by TSMK at 9:51 AM No comments:

A few months back, my oldest son's elementary school had its annual auction. In years past, this event has received tremendous support from the local business community. With the general condition of the economy this year, however, business donations were down, and the PTO was leaning on parents to donate handmade items, services, or anything else that might be of value. After some thought, I decided that I would knit something. I ultimately decided to make Kieran Foley's excellent seascape stole (found on http://www.knitty.com/ and also at Kieran's own website: http://www.kieranfoley.com/knit_lab_seascape_stole.html).

Along the way, the PTO began putting together the auction program, and needed information for the item. Although I've been known to knit in public, my hobby isn't widely known, so we decided to list the item as donated by "the {TSMK} family."

The big night arrived, and the stole was one of the silent auction items. This was the first piece I'd prepared for something other than a simple gift (although I'd gifted it to the PTO), and I admit I was pretty nervous. I was horrified that the stole would be viewed poorly, wouldn't get any bids, etc. After initially looking at the stole and the bid sheet to make sure everything was correct, I tried to stay away from the table.

The silent auction closed, and I wandered over to the table to see how things had turned out. It turns out that the stole had been the subject of a minor bidding war between one of the other parents and. . . TSMK's wife. Yes, that's correct, I knit the stole to donate to the PTO, only to have Mrs. TSMK buy the item. Too funny. -TSMK

Here is my finished version of the Seascape Stole - done in Kidsilk Haze: 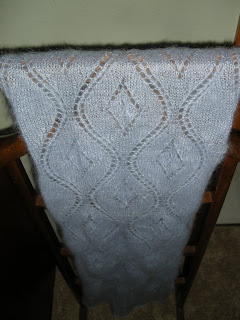 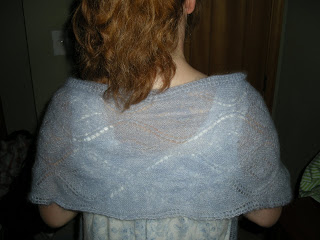 Acting on several friends' recommendations, I've decided to start a knitting blog. I'm confident that I'm not the only straight guy in the knitting community, but it occasionally feels that way, and I'm coming to realize that my own approach to knitting, colors, textures, may be influenced by my apparently unusual (for this activity) perspective. In my first few posts, I'll chronicle my introduction into the local knitting community as well as some of my prior completed projects. I'll also be sure to highlight the many unfinished projects sitting on needles at the house, planned future projects, and whatever else seems pertinent. Thanks for reading. -TSMK
Posted by TSMK at 2:03 PM No comments: