This may come as a surprise, but I kind of dislike social media.

I like writing.  I like telling stories.  And I like being able to connect with people all over the world.  Seriously, I’m occasionally floored by where some of my readers live.  (Who knew there was any interest in male knitters in Latvia?) Without the Internet, the likelihood that I’d ever come into contact with folks living so far away is pretty slim – so I’m grateful for the chance.

But those are fairly controlled interactions.  Sure, I’ve gotten a nasty email or comment or two (or more) in response to these posts.  But the overall response has been really positive.  No, when I say “social media” I mean places like MyBook and FaceSpace and similar sites.  If one could graph the number and frequency of hurtful things said or written during the course of humanity, my guess would be that we would see exponential growth in vitriol during the last little bit – most of which has been spilled by fingers on keyboards.

I’m certainly not immune.  There have been many times when my fingers have let loose with words which, on reflection, I wished I had not written.

I do find one aspect of these comments interesting, though.  They can help you get outside your comfort zone.  Let me explain.

Growing up in the southeastern U.S., I often felt like I was one of the most liberal people I knew.  For example, never once did I have an urge to pay homage to the confederacy.  As a transplant to the uber-liberal pacific northwest, I now feel like I’m one of the most conservative people I know.  Never once have I had to stifle the urge to buy a Prius.

All this is a way of saying I occasionally feel like a bit of an outsider in each of those camps.  FaceSpace has a way of reinforcing those feelings.  I log on, and am immediately greeted by the railing posts of high school classmates who remain convinced our President was born in Kenya.  Simultaneous posts from local friends suggest that multinational corporations are purposefully killing their own consumers for the sake of profit.  I confess that I don't understand either extreme. 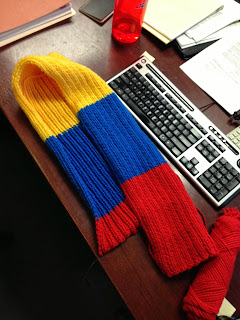 More than once I’ve been tempted to block these messages.  In fact, I’ve gone in on occasion to see if I can figure out how to navigate the settings of the site to block the most virulent of these folks – only to be stymied by my complete and utter lack of understanding as to how those privacy and user settings are configured.  So on they stay.

And on reflection, that might actually be a good thing.  Being forced to hear the opinions of others, especially of others with whom one doesn’t agree, is probably a net positive.  If I became too insulated – started for example listening only to the opinions of my pacific northwestern brethren – there’s a decent chance I could start wearing Birkenstocks year round, making my own yogurt and rallying for the rights of salmon.

Of course, the right amount of insulation can also be a good thing.  To that end, I’ve been working on a warm scarf for my middle son.  He picked out the colors (and proudly gave me the yarn).  He doesn’t know it yet, but it will be a Christmas present.