On the way to the office this morning, I noticed workers putting white lights around the trunks and in the branches of trees lining the street.  This, of course, is a sign.  A sign of the passing of the seasons.  Soon, our resident bike messengers will change from spandex and t-shirts to skinny jeans and flannel; the truly destitute will once again outnumber those Seattle residents for whom panhandling appears to be merely a seasonal pastime; and Mrs. TSMK will once demonstrate a propensity for using Jimmy Buffet as a means to combat seasonal affective disorder.

And, of course, this is a sign that Christmas is nearly upon us.  Time to take stock of my projects.

This year, I have a outlined a goal of making gifts for seventeen people.  I started early, and have been making good progress.  Nevertheless, the chill in the air seems to be whispering: knit faster… knit faster…

To date, I have completed six and three halves.  On the complete list, a couple of sweaters, two wrestling masks, a pair of elf slippers and a pair of fingerless gloves.  On the not-yet-complete list, a second pair of fingerless gloves, another wrestling mask (mask 3 of a planned 6) and a scarf.  Good progress, but the days seem to be turning shorter.  There are essentially 8 weeks remaining.  Will I make it?  Will I need to spend every weekend in residence at my LYS – trying to keep pace?  Will I spend Christmas Eve huddled downstairs by the Amish Fireplace knitting until my fingers cramp?

As the Echidna is my witness, I've been that guy.  The one you see coming down the aisle of the airplane, infant in arms, making the other passengers squirm.  Or the guy constantly raising his arm in class, asking the dumb questions.  Or the guy wandering into the express lane at the supermarket without noticing the incongruity between the "15 items or fewer" sign and the mountain of groceries in his cart.

And yet, I still find myself squirming when it isn't me.  When I see that guy approaching.

It happened again this past week.  I saw it happening, but still didn't manage to get out of my own way.  Stubbornly focused on the apparent differences between us than our natural kinship as living beings.

I was sitting on the ferry.  A later boat than usual, but I would be home by 8:00 or so, and that wasn't too bad.  I was knitting.  And, per my habit, my knitting had a soundtrack.  That night, the soundtrack was classical Indian music: sitar and whatever they call those drums that always seem to play in the background.  I was, as they say, in the zone.

And that's when I saw him.  In fairness, he would have been difficult to overlook.  I'm six foot one, and he was at least a half foot taller.  Wearing a black trench coat.  His closely trimmed beard was accentuated by the gold ring that pierced his septum.  He was wearing a porkpie hat.  And, for good measure, an eye patch.  Like it or not, he had my attention.

He headed straight for me.  And, despite all the empty booths in that part of the boat, he sat down directly across from me.

"yes," I replied.  Trying to be polite but still inexplicably hoping to avoid a full-blown conversation.

He raised an eyebrow.

"I'm making a bunch of them as Christmas gifts for my sons and a few of their friends."

"That's cool.  What are you going to use for the second color?"

I looked down at the blue yarn coming off my needles.  "I'm thinking red, or maybe white.  Haven't decided yet." 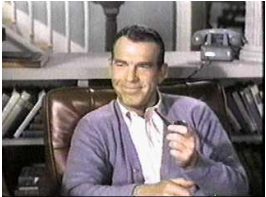 "I always liked to knit," he said. "Never found it emasculating at all."

And then, before I could respond, he continued.  It turns out he liked to sew.  He started sewing when he found a roll of leopard print fabric wrapped around a palm tree after a storm.  It was an omen.  A sign that he should learn how to sew.  And so he made a pair of leopard print cargo shorts.  And then he moved on to fake fur.  Soon he was making furry shorts and tight pants for all his friends.

Now, though, he mainly makes corsets and bustiers for friends.  He explained in some detail how he goes about making a pattern for a skin tight corset - but honestly he lost me after he started to describe wrapping the person in plastic wrap and duct tape. 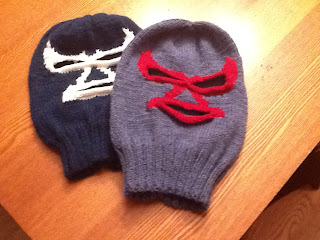 Then he started telling me about his friend.  The one who works exclusively in leather and makes a lot of masks and harnesses for people with somewhat unusual private lives.

And then the boat docked, and we started to walk off together.  He was still talking. Now about how useful it is to know how to sew when you live on a boat.  And then, suddenly, without warning: "have a good night, Sir!". And he was gone.