The Most Wonderful Time of the Year

I love the Christmas season.  In fact, I love almost everything about it – from the gaudy decorations to the frequently insipid music.  I love Christmas so much that I’m able to avoid acts of homicide notwithstanding the every-ten-minutes Lexus commercials trying desperately to convince me that unless I get Mrs. TSMK an overpriced Toyota for Christmas I’ll never truly win her affection.


Christmas is, in my opinion, the most wonderful time of the year.  Even if the song, itself, is crap.
One of the things I like the most about Christmas is that it is an excuse to give to others.  I shouldn’t really need an excuse.  None of us should.  But for some reason, having an excuse makes it a bit easier.
This year, we did something as a family that made Christmas even that much better – some surprise gifting.
Here’s how it went down.  The entire TSMK family found itself, the weekend before Christmas, at a big box retailer.  This particular retailer had been making a big deal in advertisements about how it had “brought back” layaway for the holidays.  I’d seen those commercials - but didn’t pay much attention until I read an article online about someone back east walking into a different big box retailer and paying off a bunch of layaway balances for complete strangers.  This had gotten me thinking.
We arrived at the store and made our way to the back.  Layaway, it turns out, was being handled in the same area as in-store pickup of online orders.  My oldest son and I waited in the line while Mrs. TSMK walked around with the other boys to do some shopping.
Soon enough, it was our turn in line.
We’d like to pay-off some layaway.
Ok – do you have an account number?
No.  We don’t have an account.  We’d just like to pay off a balance or two.  How do we do that?
The clerk smiled.  “You’re the second person I’ve talked to this week who has done this.”
After talking about our intentions, the clerk did some digging and found a few accounts with open balances and a combination of either toys or children’s clothes.  A few keystrokes and a transaction later, and we were done.  By law, we apparently weren’t allowed to pay the whole balance on anyone else’s account; each account was left with a balance due of $0.01.  The clerk got on the phone and began to call the account-holders to let them know they should come in and pick up their items.  A quick high-five with my son, and we went off in search of the rest of the family.
But our work wasn’t done.  We had budgeted a particular amount we wanted to give but hadn’t been able to meet our quota in layaway.  So we started looking around.
I like watching people.  But it turns out I like watching them even more when I’m plotting a gift.  We stalked the aisles of the toy department.  We loitered near the car seats, strollers and onesies.  And then, with what we hoped was an air of confidence but was actually a feeling of tremendous nervousness – we pounced.  A young woman was picking out infant clothes.  A toddler sat in her cart.  An infant was strapped to her chest.  My son and I – hand in hand – approached her.
Excuse me
Yes?
I wonder if we might give you something.  I extended my hand.  I’d folded up a few bills in what I hoped wasn’t too sweaty a grip.  I placed them in her hand.
Merry Christmas.
Why?
Merry Christmas.
My son and I walked away.
Our family re-enacted this scene on two more occasions in the days that would follow.  I’m hopeful that each time we did this it helped to make someone’s holiday just a bit brighter.  I know it did mine.
And with that – let me offer a challenge.  In the year ahead make a point to give something to a complete stranger.  Whether anonymously or in person – I suspect you’ll find it exhilarating – and your kindness will help make the world a better place. 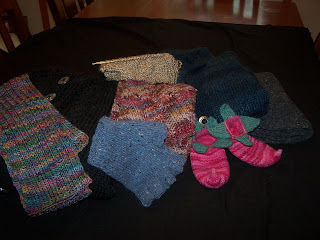 Of course, with the holidays you also get knitting.  And I was busy this year.  All told, the breakdown was as follows:

Rather than describe all in a single mega-post, let me start with the slippers.


As regular readers will know, I put a couple of slots on my Christmas knitting list up for grabs a few months back.  Out of the many responses, I picked two.  Well, actually I picked three but one turned out not to be a Christmas gift but instead a pair of labor & delivery socks - I’m pleased to say that I’ve since heard that the socks were well received and mom & beautiful baby girl are doing well. 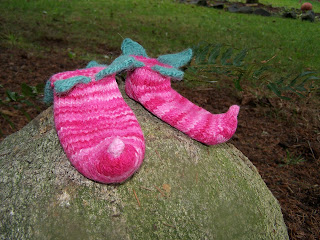 But I digress.  One of the entrants was a mother who asked about getting some elf slippers for her infant daughter, Carmen.  This was too good an opportunity to pass up.  I found a pattern, and here they are – made from Lamb’s Pride worsted and then felted.  As recommended by the pattern, I added a bit of nonslip texture on the soles. 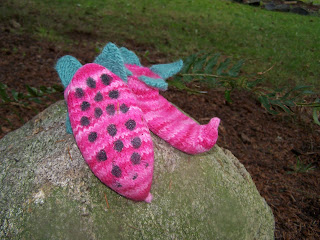 They were a quick knit and I like them very much.  In fact, I think I may need to make Mrs. TSMK a pair.