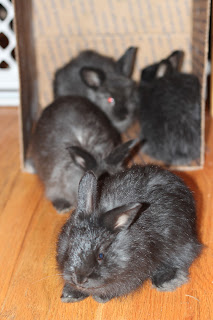 Years from now, ﻿when my children have children of their own, I look forward to telling the tale.  I will embellish it, of course.  But only slightly.
"Kids", I'll say.  "Let me tell you about the great rabbit migration of twenty-twelve.  And they'll listen with rapt attention as I tell of the days when rabbits roamed free.  Eight of them.  In the kitchen. 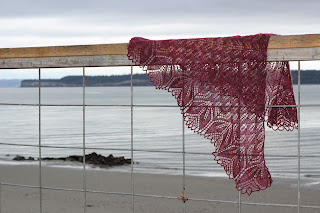 The calendar doesn't agree, but from the looks of things, spring has actually arrived.  Gigi's kits are growing like mad.  The hops have started growing in the garden and the tobacco has sprouted in the office.  And the spring auction season is well underway.
In addition to the shawl I did for the PAWS auction - I agreed to do a piece for my two older boys' school auction.  Since lace shawls seem to be popular at the event, I stayed the course. 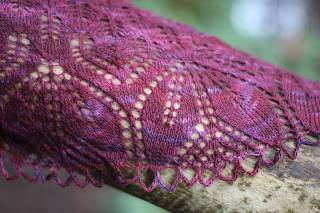 This is my version of Haruni, by Emily Ross.  The pattern suggests doing it in a slightly heavier yarn - but I'm a sucker for laceweight blocked nearly to death.  So I've done mine in Malabrigo lace.  At about 44 inches wide, it isn't exactly huge.  But the merino-based Malabrigo (even if there is only about 45 grams of it in the shawl) is amazingly warm.  Just right for a blustery day on the Puget Sound - or a slightly misty walk through the woods.
If you're local and you like what you see - come to the auction and make it your own.  I understand tickets are still available.
Last, as a bit of housekeeping, I was contacted recently by a nice lady in the UK - doing an article on the Phenomenon of the Male Knitter.  Interesting bit and worth a read - although that last guy she interviewed doesn't seem entirely trustworthy.
~TSMK