Somehow I knew this day would come.

To be sure I’ve expressed this concern before. And every time I did, those around me would scoff.


“You? Why on Earth would they take you?”
Honestly, I didn’t mind them thinking I was mistaken, but from their attitude – as if I wasn’t even worth the effort – not even worth a quick probe or whatnot – my self-esteem was starting to suffer.
But, as it turns out, I was right.
I am being abducted by aliens. And unlike most abductees, who only learn about their abduction as it happens or perhaps after the fact through some sort of recovered memory – I’ve learned of mine in advance. Two weeks in advance.
That’s right. I’m going to be abducted by aliens on April 29, 2011.
And since I knew the day was coming, it doesn’t really much feel like a surprise.

But there is one aspect of it that I wasn’t expecting. I never really expected them to be Canadian.

I don’t know why not. My own shortsightedness, I suppose. But… Canadian? Well, at least they’ll be polite.
I’m told that they’ll be taking me across from Port Angeles over to Victoria on the morning of the 29th. The crossing apparently takes about 90 minutes. And they don’t plan to return me for three whole days. That, ladies and gentlemen (but mainly ladies) is a lot of missing time.
While there, I’ll primarily be cooped up in some mothership called The Empress. From the sound of it, I'm a bit worried.  I hear they serve something called “Afternoon Tea”. Now I grew up on Sweet Tea – but this sounds like something entirely different. Something almost formal.  In fact, I have a sneaking suspicion that unlike the tea of my childhood, this tea will not be served in a canning jar.
But, gentle reader, I promise you that I will escape from the foul Empress and explore a bit – if only to bring back my harrowing tales from this otherworldly place. I have been told by a good friend (herself a former abductee) that these particular aliens have a fondness for wool.  I plan to seek out the truth behind this rumor – and try to find some alien wool that I might bring home. 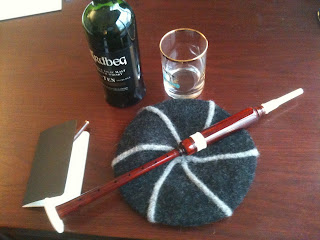 After much thought, I’ve decided that to best escape the Empress I’ll need to try to blend in with my surroundings. And so, I’ve begun preparing my provisions. I don’t know much about these aliens, but I do understand that many of them are originally from some place called the “Ewe-Quay”. And after a bit of research, I learned that the denizens of the Ewe-Quay have a particular fondness for whiskey, bagpipe music and woolen garments. So I’m making my preparations. And I’ll get to wear my newest hat. 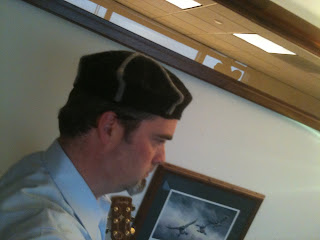 This is a variation on a felted beret pattern from my favorite LYS. I toyed with the shaping, and also added built in I-cord of a contrasting color, to give it an extra bit of structure and interest. I like it quite a bit and, I’m flattered to say, so do the good folks at the LYS, who asked me to write up the pattern. Who knows, maybe they’ll see fit to do something with the pattern and my Abduction Hat will ultimately serve as a beacon of hope for all others who may ultimately come to share my fearsome fate during their own alien encounter.

Spring has definitely arrived here in the water-logged Pacific northwest.  All the tell-tale signs are here.   The robins have returned.  Ostentatious daffodils scream "yellow" from every flowerbed.  Hipster bike couriers have taken scissors to skinny jeans in an effort to pull off some sort of skinny-short-bicycle-jean abomination.  Every so often, the sounds of Django Reinhardt can be heard at high volumes from pasty-complected gentlemen wearing hand-knit berets with the tops down and the heaters turned up in their convertibles.

Spring is also school and charity-auction season around here, and there are no shortage of invitations.  So far, Mrs. TSMK and I have only bought tickets to one such event - the auction for our oldest boy's school.  Like every year, they've asked for parents and local businesses to donate items to the cause.  You can probably see where this is headed. 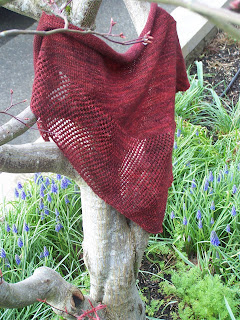 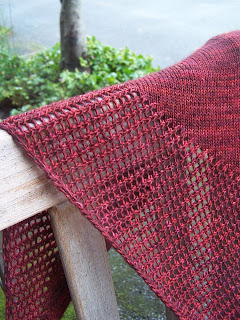 The pattern is a slight variation on Susan Dittrich's Pinkerton Shawl, found in the current edition of Interweave Knits, and I've done it in Madelinetosh Tosh Merino Light.  I love to knit this yarn, and enjoy the feel of the finished fabric.  It is very soft.
For anyone local who feels the need to bid, the auction is this coming Saturday at the Kiana Lodge in Suquamish.  I suspect there are still tickets to the auction available.  Please come, bid early and often (and outbid Mrs. TSMK - who is waffling on whether she'd wear this color).
And now, if you'll excuse me, I need to go find my Django Reinhardt cd.  Spring is calling.
~TSMK
Posted by TSMK at 11:03 AM No comments: