Every so often, I think it is probably wise to do something of a mental debriefing: to reflect on things I’ve learned recently.  This morning, I found myself doing just that.  And, as is my custom, I will now share with you what I’ve learned, what I think I’ve learned, and what I’m not sure whether I’ve learned or not.


One thing I’ve learned is that every year, without fail, I prematurely predict the arrival of spring.  I notice a few crocus (crocuses?  crocusi?) poking out of the ground, a bud on a cherry tree or two, and congratulate myself on having made it through another long, dark and wet winter here in the Pacific Northwest.  Thus congratulated, I will look out of my window and notice snow flurries.  And so one thing that I think I’ve learned is that while I am actually rather poor at predicting spring – I am reasonably good at precipitation prognostication.
Another thing I’ve learned is that there is great satisfaction in finishing projects.  I am notorious for keeping multiple projects going at a time.  So much so, that while helping me organize my stash and projects (most awesome Christmas gift ever) Mrs. TSMK filled an entire plastic bin with things “in the works”.  Honestly, I knew I had a few things going – but didn’t realize I had a full bin’s worth.  So since the holidays I’ve been trying to finish a thing or twelve.  I completed a sweater vest that I started roughly a year ago, as well as a pair of socks (I’ll share those with you in future posts).  So I am making progress. 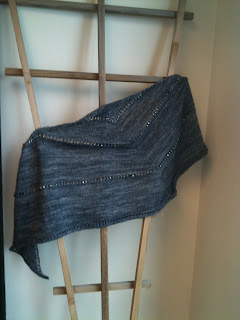 But it is difficult to focus on finishing your vegetables when your dessert is available – and even more so when people are actually asking you to eat the dessert.  And one thing I know for certain is that just as certain as shame follows spandex, the arrival of the crocus (crocusae?) is followed by the beginning of the charity auction season.  I’ve been asked to donate to two such auctions this year – and have delivered the first item: an asymmetrical scarf/wrap/thing done in Madelinetosh with beads.  From tip to tip it is about 50 inches – and the sheen of the yarn seems to complement the beads nicely.  If you’re local and want to see it up close, or better yet buy it and support a good cause, you’ll want to attend the Progressive Animal Welfare Society (PAWS) Wild Night Gala on April 14.  Hope to see you there!
~TSMK
Posted by TSMK at 11:23 AM No comments:

Last night, I found myself wondering about many things.  Like why it is that those three big pyramids on the Giza plateau are in an alignment almost identical to the three stars in Orion's belt.  And why it is that I can't seem to find Yoo-Hoo in the Pacific Northwest.

Some of these things (like the Yoo-Hoo), I wonder why I wonder.  But if there is one thing that daily meditation has taught me it is that my mind goes where it goes, and I really shouldn't worry about it. 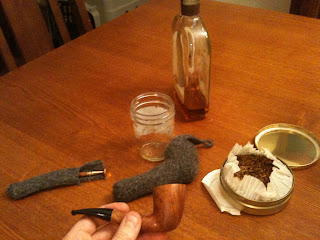 As for the pyramids, Orion's accessory and last night, well I wondered these things because I was sitting outside on the front porch.  Mrs. TSMK had a girls' night out.  And I had a guy's night at home.  Just me and the two other members of the TSMK Blog staff - the Labrador and the Corgi.  We sat on the porch, the three of us, and gazed at the stars, sipped excellent bourbon out of a jelly jar and puffed on a pipe.  Well, actually the three of us didn't do those two last things.  Those were just me.  I've found that the Labrador drools a bit too much to let him puff on my pipe.  And bourbon makes the Corgi a smidge gassy.

And while sitting on the porch, I had a moment to use my latest completed object.  This has no rhyme, reason or pattern.  But it was something that needed to be done: a felted pipe cozie/condom.  And, to go with it - a similar cozie/condom for my tamper. 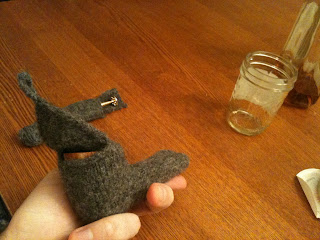 The yarn is Shetland DK.  The pipe is a Luciano.  The bourbon is gone.

A matter of National Importance


It isn’t often that I use this forum for something other than pure entertainment purposes.  But today I feel I must.  Indeed, I believe I would be shirking my responsibilities as a quasi-public-pseudo-personality if I did not bring an important issue to your immediate attention.
But I must warn you.  The issue I raise today is of paramount importance.  In fact, it may be the most pressing issue of the day – and yet our political leaders appear ambivalent to the pending crisis.  We stand, as it were, on a precipice.  And it is my great fear that we find ourselves today standing precisely where the Romans stood as Nero fiddled into the night.
We are losing the pastry race.
I know that those are bitter words to swallow.
Allow me to explain.  I am in the throes of OFB 2012 (“Operation Fat Bastard” ©TSMK).  Like many non-recurring charges on a corporation’s balance sheet, OFB is a one-time event that seems to occur on a yearly basis.  If memory serves, OFB 2012 is sixth consecutive observance of this once-in-a-lifetime occasion.
To mark this auspicious occasion, participants spend absurd amounts of time running on moving belts while pondering the mysteries of chafed nipples, and attempting to avoid hernia while lifting heavy objects.
Like all semi-religious observances, there is also a certain amount of fasting involved.  Not your average – don’t eat a single thing – kind of fasting.  Just the kind of fasting where you don’t eat anything that you actually enjoy.  Ten pounds of raw spinach?  Knock yourself out.  A single morsel of chocolate?  Only at the risk of eternal damnation.
The goal of OFB, like all such observances, is to perform penance for prior sins, and to maintain a certain level of grace in the eyes of a more evolved being.  But, of course, with denial of the flesh comes temptation.
And it is precisely that temptation that has caused me to become aware of the pastry-debacle facing our nation today.  For essentially every first-world country has a signature pastry.  But as far as I can tell, we have none of any meaningful importance.
I have the solution.  For I have, in a fit of anaerobic light-headedness, had a mouth-watering vision of splendor. 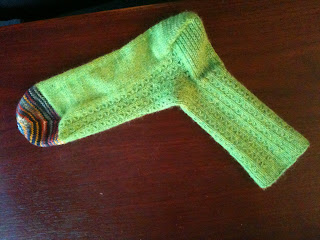 We need a chocolate-covered bagel-thing.  In its ideal form, this delectable morsel would have the chewy saltiness of a traditional kosher-salt bagel – but would covered (nay – drenched) with a chocolate ganache.  With a bagel such as this, we could take over the world.
In other news – tonight I will finish what is (I think) my fifth pair of socks.  And this pair is for me.  The pattern is Java – found on Knitty.  Rather than run the ribbed cables out to the end of the toe (and run what seemed like a decent risk of running out of yarn – I’ve used the pattern’s decreasing structure but some left over Socks that Rock yarn to do a contrasting toe.  I like these quite a lot.

And in other news, Gigi is now the proud mother of eight young kits.  She would have written the second installment of the Ballad of Buster and Gigi, but she’s been quite busy chasing Buster for child support while nursing the hungry kits.  So she asked me to provide the update – along with a picture of the growing brood. This brings our herd of angora to 14 - and I'm already quite eager to spin some of the wool from the dark kits in this litter.