If the entries are any indication, there are quite a few folks (on three continents so far) who have an interest in roadkill stew. So much the better.

I write at this time to share another incredible entry in the giveaway. But first, I feel compelled to apologize.

All this time, I have felt concern for Renee Zellweger - thinking that she was perhaps a victim of unfortunate circumstances. But I was wrong.

You see, I occasionally put my foot not only in my mouth, but fully down my esophagus, through my stomach and into my duodenum. Apparently, my comment about R.Z. was such an example.

Some years ago, we had two very interesting neighbors in the TSMK cul-de-sac.

Note - by the "TSMK cul-de-sac" I'm speaking geographically and not anatomically. To my knowledge, not only do I not possess a Pouch of Douglas between my rectum and the back wall of my uterus, but I don't happen to have a uterus, and seriously doubt that if I did I would have two very interesting neighbors in the vicinity. No, indeed, I'm referring to the actual street upon which I and the entire TSMK clan happen to live.

With that minor issue cleared up, let me explain my gaffe. Our neighbors, Zeus and Hera [names changed to protect the odd, if not exactly innocent] were very strange, sweet people. For the first two years we knew them, I'm not sure I ever saw Zeus wearing a shirt. This in itself was unusual, given that Bainbridge Island is not exactly Ibiza. Meteorological issues aside, Zeus also resembled strongly resembled Christopher Lambert as Tarzan, Lord of the Apes. At least he would have resembled Tarzan if Tarzan had been covered in tattoos, with pierced nipples and a penchant for borrowing my table saw.

You see Zeus was remodeling his kitchen, and although he claimed to be a carpenter, he apparently didn't own any tools. And so he used mine. Often. And for long periods of time.

When Zeus and Hera [who, unfortunately did not resemble Andie MacDowell in her role as Miss Jane Porter - or any other role for that matter] finished remodeling their kitchen, they wanted to thank me for the use and significant dulling of my tools. In thanks, they graciously gave me a bottle of scotch.

That isn't exactly true. They gave Mrs. TSMK a bottle of scotch, and asked her to give it to me. I'm sure that she did tell me about the bottle. In fact, she probably showed me the bottle. But I'm afraid it just didn't register.

A few days later, Zeus and Hera came over to our house for dinner. Mrs. TSMK prepared a lovely meal, and we sat around the table trying to engage in polite conversation despite the fact that we had essentially nothing in common other than a similar street address. Thankfully, Zeus was wearing his shirt.

Trying to be the good host, I offered our guests some drinks. They accepted. This wasn't especially surprising, particularly with Zeus. In fact, Zeus had that very evening spent a good fifteen solid minutes contemplating the exposed gears of the bevel drive on the TSMK Ducati while expounding upon how cool it would be "on acid." Zeus was an accomplished user of all manner of mood-altering substances.

I left the table and went into the kitchen to grab a bottle of something. Reaching into the cabinet, my hand first met a very disappointing example. This was good, I thought, because I wouldn't necessarily need to share a bottle I prized. I quickly shut the cabinet, got some glasses, and made my way back to the table.

On my return, I immediately began apologizing. "This all I have" I said. "I wish I had something better," I said. "I didn't buy the good stuff the last time I was at the store," I said. "This stuff is awful," I said. All the while Zeus and Hera looked at me in stunned silence. Mrs. TSMK glared.

I'd tell the punch line, but of course you've already guessed. The bottle I was holding was the scotch they'd given me in thanks only a few days earlier. In my own defense, it was a very poor example of the breed. 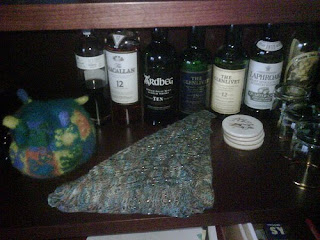 All of which leads me back to my most recent gaffe. One reader has been kind enough to point out that R.Z.'s facial features may be the result of her ancestry. Apparently she's of Sami descent, and that may explain the vast plateau between her eyes, although it does not necessarily explain her complete inability to act. And so I offer my apologies to R.Z. Or more specifically, to R.Z.'s mother with respect to any prior allusion to fetal alcohol syndrome. No hard feelings I hope.

That out of the way, let me share one of the more remarkable entries I've received in the giveaway: a sonnet from M.H in Massachusetts.

I saw a photo on a blogspot blog
That stopped my heart, it was so fair to see:
I shudder at the thought that one might frog
A shawl so delicate, so fine -- indeed so "me"!
I've heard about the knitter of this find
A man of class, who drinks of Islay's dew
Who cheers his fans with his discerning mind,
Who wears the kilt, and blows the bagpipes, too!
Dear sir, if a poor poet may request
A thing as worth as this grand confection
Such skillful use of Araucania's best
Would be the glory of my own collection!
Alas, my time to make my case has gone
And so, sir, "slainte mhath, is soraidh slan"!*

The shawl is folded and ready for its new owner, and sits peacefully on the shelf of single malts in my office. Well, actually it sits with a bunch of single malts, a bit of port and a remarkable small batch bourbon. Keep the entries coming - the ides of March will be here before we know it.

Ok, so the shawl giveaway started just two days ago, and I'm already getting some great responses. I wanted to share a couple:

From a very polite Canadian infidel:

The straight male knitter
does not like the ugly shawl.
I will love its warmth.

The lace confuses
and all the detail haunts me.
But the want remains.

Thank you both for your excellent entries and poems!

The eye of the beholder - free shawl

Some things are ugly. A pimple, for example. Or perhaps roadkill.

But even with roadkill there are afficianados. For you see, one man's roadkill is another man's stew. 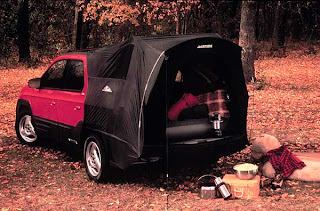 Then there is the ill-fated Pontiac Aztek - occasionally referred to as one of the ugliest automobiles of all time. And yet there are those who found its versatility beautiful. After all, it isn't every car that can double as a tent.

So we see that even ugly things can, and often do, have an inner beauty. Or at least an inner utility.

Also, there can be no accounting for taste.


My own tastes are somewhat - what's the word - eclectic. As Mrs. TSMK will attest, I have no qualms about mixing the striped shirt with the paisley tie. More to her horror, I have recently begun to enjoy the freedom that is the Utilikilt. Just yesterday, in fact, it took all of her resolve to accompany me and our sons on a kilt and Birkenstock-clad jaunt to the local nursery to look at bonsai pots. Oh yes, the TSMK aesthetic is occasionally unusual. 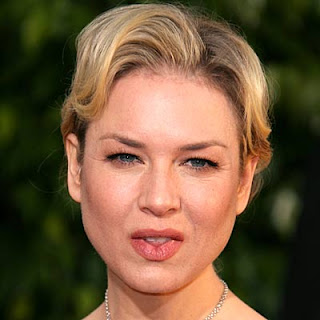 All of which is my way of acknowledging an important fact - my tastes are my own. What I like, I recognize that others may not. And what I dislike . . . Well, put it this way, I happen to find Megan Fox's forehead disturbingly large and wonder whether Renee Zellweger may actually be an unfortunate sufferer of fetal alcohol syndrome. [That last theory might actually explain her acting as well.] Obviously, I'm out of touch with the aesthetics of the mainstream.


It is with that caveat that I share my most recently completed project. The pattern is Bitterroot, by Rosemary Hill. It is easy to follow, and as you can see from the pictures in the link, it can lead to a spectacular finished product.

Unless I knit it and decide to play around with the suggested type of yarn. 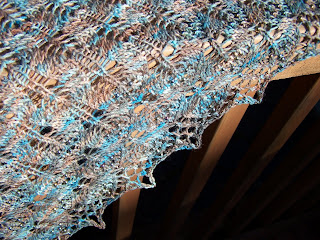 Rather than make it lacy and delicate, I decided to make it in a slightly heavier weight of yarn. In this case, I've used Araucania Ranco Multy - a sport weight wool/polyamide blend. I knit it on US #6 needles, and it worked quickly - about 15 days from cast on to bind off. It incorporates about 1.6 skeins (so about 600 yds) and 600+ beads.

That isn't really true. I don't hate the design. But I hate this pattern in this yarn. It is a bit like scotch and doughnuts. I like scotch, and I like doughnuts, but I don't think I'd much like a Laphroig-flavored crueller - of course I love dark-chocolate & bacon truffles, so I could be wrong. 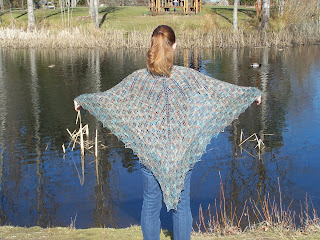 I thought the colors in the yarn - with turquoise and brown and green, would remind me of the water, sand and dunes of the beach. I was wrong. I can't say exactly what they remind me of, but for me it isn't good. And Mrs. TSMK doesn't like it either. 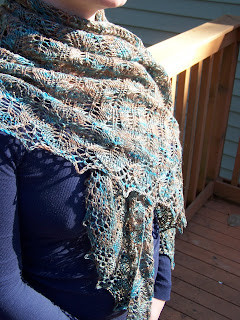 But one of you might like it. Perhaps your own tastes lead you to think that it is beautiful. Alternatively, perhaps you're desperately in need of a shawl for warmth (it is very warm) and you're conveniently color-blind. Maybe you're the kind of person who likes to unravel yarn and you're in need of a project.


So I'm giving it away through the blog. But I can't just give it away, obviously. I'm a lawyer by day and so believe there must be some sort of rules/structure around this offer. With that said, here are the rules:


1. I will only give it to someone who wants it for his or her own. So don't ask for the shawl if you plan to regift.


2. To be given the shawl, you must promise to send me a picture of you wearing/using the shawl, and give me permission to post the photo on the blog. If you win the shawl but fail to send a photo, I reserve the right to subject you to public ridicule - perhaps in limmerick form (e.g., there once was a welcher named . . .)


3. This will not be a random drawing or some such nonsense. No, I want you to tell me why you want the shawl. I'll pick from the group based on those responses. Please note that your responses (without your name) may be posted on the blog. Please note also that I will give special consideration to the creativity of your response, and extra-special consideration to responses written in haiku.


That's basically it. If you want a chance to get the shawl, shoot me an email at tsmkblog@yahoo.com. I look forward to getting your responses, and will accept responses until the Ides of March - subject to extension in my sole, and admittedly arbitrary, discretion.