The Truth Will Set You Free

This is my one hundredth post.  And in honor of that auspicious occasion, I would like to tell you a story.  It is a true story.  And it is a timely story as the events described occurred this very day.

I was sitting alone.  The ferry was relatively empty as the yearly tourists, wary of becoming waterlogged, had not yet descended upon Seattle.   They'd guessed wrong.  It was a beautiful sunny day.

I was working on a glove: tipless and the second of the pair to be delivered to the winner of the TSMK-WWIBG.  Although Saturday, I'd spent the day in the office trying to catch up on work and listening to basketball games on Internet radio.  Things were good.

I finished a round on the gloves, and looked up.

She was coming toward me, down the long hall of the ferry.  A woman, as they say, of a certain age.  Her reddish blond hair was in a loose bun.  She wore a dark green overcoat  and was pulling a rolling suitcase.

I went back to my work.

I finished the first needle of this new round.  As I began to position the needles to start on the second, I noticed she was still approaching.  She appeared to be studying me.

Knitting in public has its drawbacks, and occasionally feeling like a curiousity is among them.  But a small price to pay, I thought to myself, for the chance to knit quietly in a sun-drenched booth on the ferry.

Not necessarily wanting to make eye contact, I went back to the glove.

And that's when she said it.

Right as she was passing, and without breaking stride.

"There's nothing sexier than a man who knows how to knit."
For perhaps only the fifth time in my life, I was completely speechless.

Had I heard her correctly?  Was I hallucinating?  Had the barrista slipped something illicit into my double-tall sugar-free skinny hazelnut latte?

And then it hit me.

I had heard her correctly.  And she was speaking the truth.  I'm confident that not even George Clooney shirtlessly clutching a cherub while sipping cognac, reciting French poetry and surrounded by Golden Retriever puppies is a sexier man.

They say the truth will set you free.  And I assure you, that this truth, this very important truth, will stay with me for a long time to come.

The past is a funny thing. I spend a fair amount of time worrying about it, and yet I’m not sure it actually exists. Now exists. But the past? Whatever went before is simply gone. Why perseverate?

At least, that’s what I tell myself when my personal hamster wheel is running at full throttle. 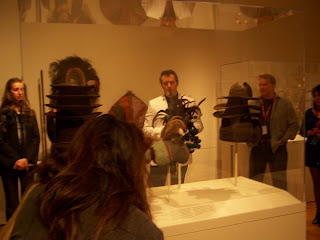 Last week, I gave my “Highly Opinionated Public Tour” at the Seattle Art Museum. It was a lot of fun. I’m glad I participated, and I’m relieved that I was able to muster an opinion or two to share. Mostly, I’m pleased that I had a chance to talk about my favorite thing in the space – which is of course a knit hat.
Like others I’ve discussed here, the hat was created by someone in the Bamileke community of Cameroon. It is a stunning hat in blues and tans, with a feathered crown. This is a hat of substance.
Honestly, I’m not certain what draws me to these hats. It may be the way it obliterates any distinctions between authenticity and theatricality. It may also be that I’m simply a bit odd. But I think the most likely reason is that if appeals to my sense of history and the feeling that something may be missing from my HVAC-coddled, tofu eating, minivan driving, day-to-day life. It reminds me of something gritty, grimy and, just maybe, African.

A few years back I set out on a genealogy kick. I knew quite a bit about the origins of my mother’s side of the family, but relatively little about my father’s side. But the Internet being what it is, it wasn’t long before I was able to dig up quite a few records. Among those records were census entries from the late 1800s. And in those entries were a few surprises. One, in particular, stood out. Shortly after the Civil War, my family was living in Putnam Hall, Florida.

To most of you, this fact will seem innocuous. But I’ve been to Putnam Hall. Several times in fact. And I’ve spoken with several elderly Floridians and amateur local historians. And my observations seem to jibe with their assessments. White people don’t seem to have ever lived in Putnam Hall.

Let me be clear. I am pale. My father is also. And my children, thanks to the influx of Mrs. TSMK’s genes, bear a striking resemblance to beings sculpted from a melange of Marshmallow Fluff and Liquid Paper. No one would ever mistake any of us for being black. 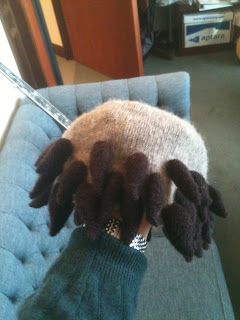 Yet there it is on the census form. And although it is possible, I’m prepared to dismiss as highly improbable the possibility that Putnam Hall in the late 1800s was a progressive community with members of all races, colors and creeds linking arms and working side-by-side in the fields.
So where does this leave me, a man with a deep love of African art and music? A man who enjoys playing the banjo – which is after all African in origin? A man whose choices in clothing seem often to cause disdain among Caucasian colleagues but almost always draw compliments from friends with a more ample supply of melanin? A man who harbors a not-so-secret desire to moonwalk with wild abandon at every opportunity?

Was my great-great-great whatever, so many years ago, black?  Did he ultimately pass himself off as white?  And if so, what did he give up in order to make that transformation?  What part of himself did he leave behind?  What part of him is in me, today?  And what part of him am I trying to reclaim for my own?
I'll never know. But after doing the museum tour, I did know that I needed a new hat. Something Bamileke-inspired. So I made one. And I wear it. And when I do, my friends of Swedish and Norwegian descent look down at their shoes and struggle to avoid eye contact. But I don’t care. I’m from Putnam Hall. 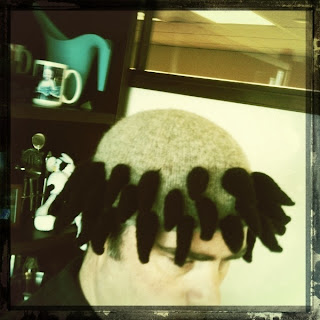 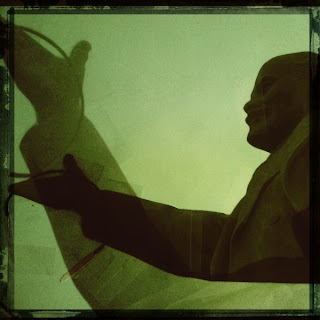 Will not be televised. 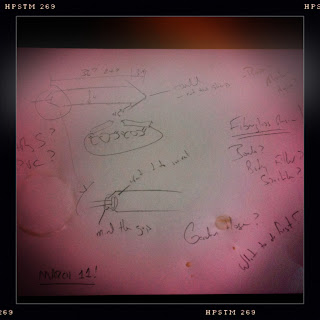 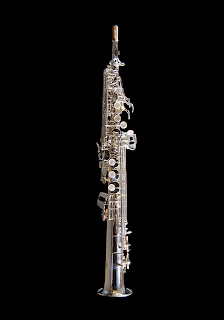 There are some things that one simply shouldn’t do. Playing the soprano saxophone, for example. It is for that reason that I suspect The Hague will soon indict Seattle-native Kenneth Gorelick for crimes against humanity.
Then there are other things that one may do sparingly, or with great discretion, such as ogling a stranger at the gym. I suspect that nearly everyone has done this. Those who are truly oblivious ogle with great abandon. The rest of us try not to ogle, but may sneak the occasional surreptitious glance.
Sometimes those glances are to appreciate the natural beauty of our surroundings. Other times, we are guilty of that most heinous crime of comparison. Briefly allowing ourselves a moment to prop up our shaking confidence on the basis of someone else’s flab.
Last, there are things that one probably should do promptly but, for whatever reason, one fails to do. This may be something as simple as wearing a seat belt or flossing. Or finishing one project before starting another.
For Stephanie, of the great Pacific Northwest, making decisions may fit into this last category. Stephanie correctly guessed all ten songs referenced in 14 Days of Safety. What’s more, she was able to channel her inner-TSMK and come up with two additional songs on that playlist as part of an ad hoc tiebreaker between herself, Kathy and Michaela. Kathy and Michaela each guessed one additional song – meaning that Stephanie has the dubious good fortune of being the future recipient of my next finished piece. The trouble is, she is having a bit of trouble making up her mind as to what she wants. Specifically, she’s trying to decide between a pair of half-fingered gloves and a hat. Either way, when she makes her decision and I make the item, I’ll show it here.
In the meantime – thank you all for participating, and look forward to another giveaway shortly. There are several projects on the needles at the moment. One or more of those things might need to find new homes.
Oh, and just so you know, the universe as you know it will change precisely one week from today. Brace yourself for this one, it promises to shake you to your very core.