Thoughts for a Thursday

After checking in with The Echidna this morning, I found I had a few random thoughts floating around.  I'm not sure they're all mine (although some of them clearly are).  So here they are in no particular order, a kind of lost & found of thoughts.  If you think one of them is yours, please take it and go about your business.

Rap music never got better than Run-DMC.  Match My Adidas or Mary, Mary against any other piece of the genre and the boys from Queens will prevail.

Why hasn't anyone made a combination bagel-doughnut?  You'd get the crunchiness of the outside of the bagel, coupled with the chewiness of the inside and the sweetness of the doughnut.  What's not to love?  Chocolate frosted whole wheat bagel might just be the world's most perfect food. 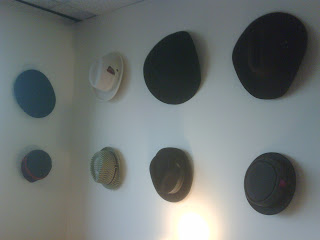 I've had the hats on the wall for quite a while now.  Should probably change it up and put something else on that particular canvas.  Not sure what, exactly.  Yarn?  Skateboards?  Paisley shirts?
Is there any mammal that doesn't have a nose of some sort?

Tonight is Mrs. TSMK's book club, and she's hosting it at our house.  I must resist the urge to do or say something that might embarrass her.  Although, to be fair, I rather like my overalls.  They're comfy.

When you write out all the multiples of 9 from 1 to 10 in one big line you get a giant palindrome.  How cool is that?

If I'd never seen and loved the original version of Top Gear, would I still dislike the U.S. version? 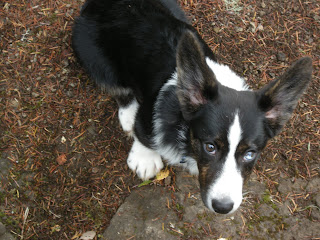 Swatching is overrated.  If something doesn't fit, rip it out and change the size.  Knit for the process, not the result.
I need to get more people to join my team for Pawswalk.  Its going to be a great time and the lace-ripper will be there in all his furry glory.

Dresssed to the Eights

I was sitting on the sun deck when I saw her.  Honestly, it sounds more glamorous than it is - the sun deck is just a covered part of the ferry I take to and from work every day.
But anyway, there I was sitting on the sun deck when she came walking past.  She was dressed, as they say, to the nines.  Or perhaps at least to the eights.  A smart suit in crimson.  Stratospheric heels.  Bobbed hair.  She was, by all appearances, a very attractive young woman of approximately 25. 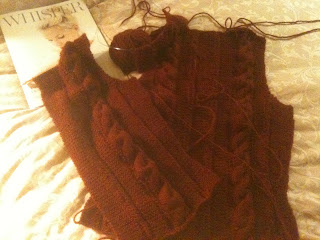 I was working on a sweater for Mrs. TSMK.  Nothing too fancy - the Edda pattern in Kim Hargreaves' new Whisper collection.  It calls for cotton, but with our climate I was going with wool.

The sun deck was quite full - and the only open seat was on my bench.  I wondered.  Would she sit down?  Perhaps she'd want to chat about the sweater and I could enjoy an afternoon cruise across the sound talking with a beautiful young stranger.

She sat, and I kept working on the sweater.

After a few moments, she began searching for something in her bag.  Finding it, she pulled out a small container of lotion.  Leisurely, she began applying it.  First to her hands, and then to her shapely legs.  A floral scent filled the air.  We weren't chatting, but I wasn't about to complain.

I kept working on the sweater.

At the halfway point in our voyage, she began again began rustling around in her bag.  The lotion was but a memory.  The heels were still off.  She pulled out toenail clippers.  I know what you're thinking.  You're thinking I'm making this up.  And I wish I were.

Feverishly, I worked on the sweater.

After performing their assigned task, the toenail clippers went back in the bag.  I breathed a sigh of relief.  The odor was still present - but the personal grooming had stopped.

Or so I thought.  She rustled around in her bag a third time.  I was praying for a hairbrush.  Or perhaps a tube of lipstick.  But it was not to be.

She
pulled
out
a
roll
of
dental
floss.


Wow.  Just wow.
I turned my body slightly to the right, to try to avoid the plaque-spatter that seemed inevitable from the frenzied flossing to my left.
I finished the row, gathered my things, and left the sun deck for the main cabin.  I don't know what manner of personal grooming followed the flossing.  I don't want to know.
~TSMK
Posted by TSMK at 10:07 PM 5 comments:

Some things simply aren't worth the effort. Fondue, for example. Sure, who doesn't like melted cheese or chocolate? But does that mean that you want to spend four hours trying to fill your stomach one tiny cube of food at a time, all the while wondering whether you'll accidentally set fire to yourself?


And, it must be acknowledged, reading James Joyce is also of dubious utility. Myself, I've been on the same page of Ulysses for the better part of a decade. To be fair, I do get some benefit from the book. Every time I feel confused by my daily existence I simply pick up Ulysses and, in the time it takes me to read a few lines, I realize at my life isn't so incomprehensible after all. At least not in comparison to Joyce's prose. Perspective is key.

Lately, I've been thinking of adding another item to this list: working with patterns containing errors. Let me explain.

Recently, I had a chance to consult with a friend who wanted to make a sweater for her husband. Now, setting aside the issue of the so-called boyfriend sweater curse and the potential application of said curse to the marital relationship, I thought this would be a fine idea. In fact, I thought it would be an excellent idea because she wanted to make the sweater from yarn spun by her mother-in-law. To get a sweater knit by one's wife from yarn spun by one's mother, I thought, would be pretty darn cool.

After some discussion of potential patterns and some estimation of the available yardage of the yarn, she picked out what appeared to be a good project: a sweater vest made in an interrupted rib.

Shortly after casting on the problems began. And they continued through the project. Some instructions seemed to make sense but led the knitter to results that differed from the results shown in the picture. Other instructions simply didn't make sense. My favorite example of the latter? Probably the part where the pattern suggested that the length from cast-on to the left and right shoulders, respectively, should be different by several inches.

[Note: it is possible that the pattern was intended for a Frankensteinian lab assistant, in which case this measurement would be accurate. Please, Igor, put down the pen and do not mail that hate letter.]

After a decent amount of struggle, the project was finished. Well, not quite. Because one error in the pattern had gone unnoticed until the sweater was about half-completed. The interrupted rib pattern was, at least for a small portion of the sweater with increases, more appropriately described as highly interrupted. And we did not have the intestinal fortitude to rip it out (which would have essentially required starting over) and fix the problem.

So is it finished? I don't know. Perfectionism too isn't always worth the effort. And while the knitter might ultimately decide it should be unraveled and begun again, the gift was given - and was received with great appreciation. Who knows, perhaps the flaw, like the rustic hand-spun from which it is made, will ultimately endear itself to the wearer. Not too perfect. Not too polished. But warm, made with care and given with love. And, just possibly, that is enough.

A few days ago, a reader of this journal asked me about my recent lack of content.
“When are you going to post again? Have you lost interest? Have you given up knitting? What’s going on?”

Well, rest assured that I haven’t stopped knitting. And I haven’t lost interest. And by posting this, I think I answered the first bit. But the last one – well that’s a pretty good question.

Lately, I find I’m thinking quite a bit about authenticity. Not a frenzied, flight-of-ideas kind of thinking, mind you. More of a long pondering, questioning and wondering exercise.

It all started innocently enough. I was complaining this winter. Bending the ear of a woman I know. A woman whose opinion I’ve come to value for her consistently wise counsel. The subject of my complaint was nothing unusual: work/life balance and a general feeling that my particular hamster wheel was starting to turn too quickly. And that’s when she said it.

This was a serious allegation. But was it true? And if it was true, what should be done about it? Some serious navel-gazing seemed required. Is writing a largely anonymous journal indicative that one lives an inauthentic existence? I put posting on the back burner to consider the question.   How about electronic interaction with complete strangers in Internet forums?  Could be – better ignore Ravelry for a while as I study that one too.  And Facebook? Don’t get me started.


Summoning the strength of The Echidna, I began doing some existential heavy lifting. I doubled-down on a pair of Ms: meditation and mindfulness. And slowly, over several weeks, I began to notice many things I hadn’t before. Like how often during the day my thoughts seem to be occupied with events, past or future, over which I have no control. Like how difficult it was to simply focus on the process brushing my teeth in the morning without letting my thoughts race ahead to the important places I planned to travel on the hamster wheel that day. Frustrating.

And so I began to shake things up. I changed my morning routine. I made jam in vast quantities. But most of all, I tried to focus on being fully present.

Now, speaking as a guy with a bit of an imagination – this has been a challenge. It has meant that I’ve tried to simply take note of the wanderings of my thoughts, and each time to bring them back to the present moment. Not damming up the stream of consciousness, exactly. But trying to prevent it from flooding its banks.

And is any of this helpful? Honestly, I don’t know. But if being more in the present will make me feel more connected to life and those around me, then it will be worth the effort to try.


In the meantime, I have done a fair amount of knitting. And I’m pleased to say that I’ve just donated an item for the upcoming Woodland Park Zoo Jungle Party auction. This is my second year in a row and I’m excited to have the opportunity.
Last year, I did a beaded lace shawl.  This year, I went with something fairly simple. It is a fairly basic scarf, but done with an open net-style lace pattern in some silk recycled from saris as part of a fair trade program. The money from the silk goes to provide incomes to women in India. I love that.  That feels authentic.   And I love the colors in the yarn. If you love it – buy tickets to the upcoming Jungle Party and bid on the scarf.