This morning, on the way in to the office, I ran into a friend.  A former colleague, he and I share many interests – scotch being among them. 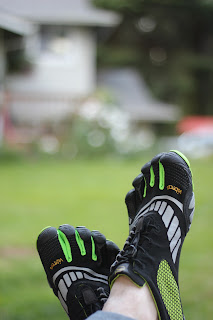 
Being somewhat prone to narcissism (I do blog, after all), I was naturally interested in what he might need to share.  Unfortunately, however, the opportunity for him to share this great secret didn’t arise during the commute, and I made my way to the office in suspense.


A short while later, I shot him an email.  What did he need to talk with me about?  Was everything ok?


He responded with a cut and paste from facebook.  One of his friends.  And as I read the text, my head began to swim.


In the immortal words of Keanu Reeves: Whoa.


First of all, I look very little like Mr. Rogers.  And I never interact with puppets.  Well, almost never.  There was that one time in college.  But that was just a phase.

Second, what’s wrong with Vibram shoes?  They are comfortable, sporty and yes, just a little bit quirky.  In essence, they are the Fiat 500 Abarth of footwear.  Sure, it may not be for everyone.  But that’s just because not everyone has the necessary forza di carattere. 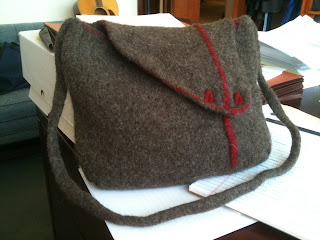 And it does hold my knitting.  Currently, it is holding the first of four projects I've agreed to make "to order" as part of a fundraiser for a local food bank.  The first is my interpretation of Juno Regina.  I cast on this past Saturday, and hope to share the finished product soon.
~TSMK
Posted by TSMK at 8:28 PM 5 comments:

Of Vice and Arugula

Let me be frank.  I loathe arugula.

I want to like it.  Badly.  But I just don't.  And I feel the same way about Kale and Swiss Chard.  As far as I can tell, Swiss Chard is about as useful as a Swiss Army Knife.  Sure it can do the job you ask of it.  But it won't do it particularly well and you're likely to be left with a bitter taste in your mouth and a strong suspicion that something else might have been better.

In the case of the Swiss Army Knife, that something else might simply be a rock.  Come to think of it, there are probably also some rocks that taste better than Swiss Chard.

The problem is, these so-called vegetables are supposed to be good for me, so I feel like I should like them.  And in my experience, any time I feel like I should something, but don't want to, the should feeling is closely followed by the three horsemen of the psychosalypse: shame, remorse and failure.

At the same time, I've noted a predisposition toward enjoying things that may not be good for me -  like high-velocity two-wheeled transportation, firearms and striking up occasionally incendiary conversations with complete strangers.  These can be fun and exciting events.  But of course I don't often feel pleased with myself after these escapades.  They haunt me.  Like the time I told the folks soliciting on the sidewalk for a noble cause that I couldn't support their mission because I was not, in fact, in favor of human rights.  Honestly, how could I say such a thing?  Or the time I looked deep into the eyes of the very earnest young woman collecting signatures for a petition on an undoubtedly worthy state ballot initiative and said: "I'm sorry; I don't speak English."

I know that I shouldn't enjoy doing or saying these things.  But sometimes I really do.  There's something to be said for the thrill of doing things slightly outside the ordinary course.  This is precisely the reason you'll see my honorary doctorate in metaphysics hanging neatly framed in my office - but the law degrees are nowhere to be found.

Here in Seattle, we lost a great institution a few years back: The Lusty Lady.  It was a landmark.  A peep-show environment right across the street from the Seattle Art Museum and right next door to The Four Seasons.  It was, in every conceivable way, a thumb in the eye of respectability and decorum.

Outside the Lady, the marquee offered up funny snippets or clever sayings - designed to attract attention.  So every St. Patrick's Day, for example, you could count on it reading "Erin Go Braugh-less" for a few days or so.  Classic stuff.

The establishment had a habit of giving away a t-shirt to anyone who could come up with a new saying good enough for use on the marquee.  And I tried for years to come up with something good enough to get used.  But no luck.  I worked on crafting tawdry double-entendre for years but none ever made it to publication on the marquee.  Just once, I thought I'd done it.  There was a group of somewhat notorious crab fishermen in town for a media tour - but apparently "Deadliest Snatch" wasn't precisely the message that the Lady was trying to convey.


And with that as background, my most recently completed item kind of makes a bit of sense, I guess.  Mrs. TSMK's brother and his wife recently welcomed the birth of a son.  When asked if they might like something made for the little one, her brother mentioned a viking hat I'd done for one of my sons a while back.  The thought of a newborn in an absurd hat is always fun - so I was happy to oblige.  Willem's hat is below.  I've made it slightly big so that he can wear it once he begins to toddle about.   After all, you can't really pillage until you can toddle, now can you?