I'm occasionally asked why I started knitting. Most recently, this question came from an incredulous mom who saw me knitting at the pool while my oldest son was taking his swim lesson. In fact, nearly all of the people who've asked the question have had the same vaguely condescending, vaguely accusatory tone.
Typically, I respond to these questions by mumbling something about having friends who knit - occasionally referring to them as "evil companions." Apart perhaps from the adjective, that answer is technically truthful in as far as it goes, but in fairness there is a bit more to the story. The full truth is a bit more involved, but probably worth recounting.
Although not previously discussed on this site, TSMK is a bit of geek (I know this is shocking) when it comes to certain music. The CD collection at home is bereft of most recent musical efforts, but full to the brim with recordings of long-dead blues musicians. I've always enjoyed the blues - a lot - and occasionally loud enough to cause my secretary to get up and shut my office door. This love of the blues doesn't stop with the scratchy recordings of the original artists - I also enjoy slightly more contemporary versions of the genre. So, for example, when Mrs. TSMK is shaking her head as the radio blares Led Zeppelin's Lemon Song while TSMK's children are in the car ("squeeze my lemon, 'til the juice runs down my leg"), I'm less concerned with the meaning than the appreciative of the fact that Plant and the boys are really just paying homage to Robert Johnson's Traveling Riverside Blues of some six decades earlier. Often these interactions end with Mrs. TSMK suggesting that she doesn't really need me to tell her again about how Bonham's squeaky bass drum pedal can only be heard on two tracks, or something along those lines. She's a very patient woman.
Anyway, I digress. 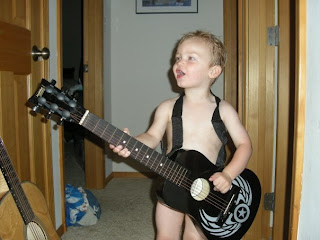 When I was around 14 or so, I was received ZZ Top's Eliminator album for Christmas. As I was already a blues guy by that age, I loved the album. It started in me a lifelong appreciation the band, and in particular for the style, guitar work, and overall mystique of Billy Gibbons a/k/a the Rev. Willie G. I believe that Billy's work is top notch, and I'm not alone in that view. In fact, for the first three years of his life, TSMK's second son has given every indication that his favorite song is not Twinkle Twinkle Little Star or some other age-appropriate number, but rather La Grange. He particularly likes to sing it while playing his guitar after bath. (You'll note TSMK's guitar leaning against the wall on the left - there's often music involved in the boys' baths).
One evening, I turned on the television and noted that a ZZ Top concert would be playing later that night. I set the DVR to record it, so that we could watch it later.
Sure enough, later that week I found myself on the couch with TSMK's oldest and second (then youngest) sons, watching the show. Midway through, the Rev. Willie G. was drawling out the lyrics to one of my favorites: I'm Bad, I'm Nationwide:
Well I'm moving down the road in my V-8 Ford
I had a shine on my boots, I had my sideburns lowered
With my New York brim, and my gold tooth displayed
Nobody gives me trouble, cause they know I've got it made . . .
Just at that moment, I had a revelation. The Rev. Willie G. was wearing an excellent hat. Actually, he was wearing two excellent hats, one on top of the other. The hat on top was a beat up cowboy hat. But it was the hat underneath that had captured my attention. I'd never seen anything like it. It was a kind of beanie, but with small pendulous fingers of fabric hanging off of it. I needed one of those hats. 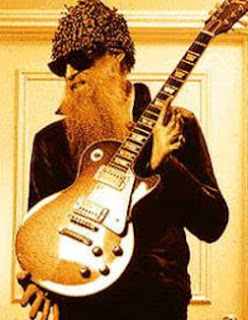 A few moments later, with the help of the Internet (see http://www.youtube.com/watch?v=xL-hCd-x_oU for an interview with Gibbons about the hat), I learned that the hat was of African origin. Specifically, it was a traditional hat of the Bamileke tribe from Cameroon in West Africa. To me, this this made perfect sense. Blues music traces its roots to West Africa. Here we have in the Rev. Willie G. a man playing the blues while wearing a West African hat. Genius.

I looked further on the Internet and found dozens of examples. They were made in all styles and colors, but all with the traditional finger-like pieces of fabric on them. Some had small pieces of wood inserted into the fingers to make them stand up. Others allowed the fingers to drape like hair over the hat. All were remarkable. 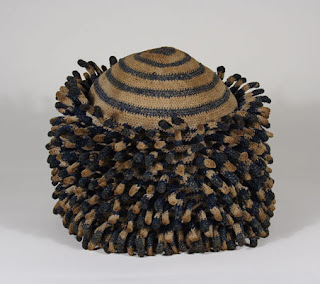 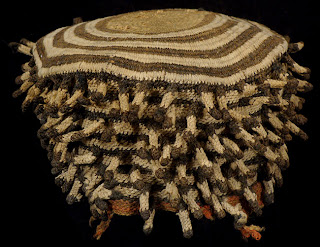 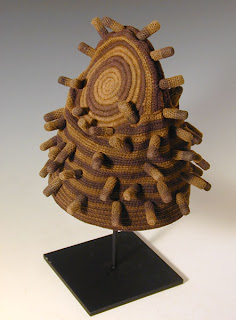 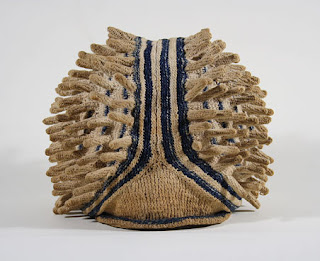 And, unfortunately, all were in museums or at a price point where you'd feel uncomfortable wearing the hat. If I was going to get one of these hats, it seemed clear that I would need to have it custom made.
The next day, I approached my friend Miss B. I had seen Miss B. knit incredible sweaters, scarves, etc., all during our mutual commute. I shared with Miss B. my desire to have one of these hats, and my dismay at being unable to find one for purchase. I showed her a picture of a stunning Bamileke hat done largely in orange, and offered to pay her handsomely if she would make me a hat. She didn't take the bait. Instead, she offered up ten words that set me down my current path: "You could always learn to knit and make one yourself. . ."
I still don't have my hat, but I will. Oh, yes. I will have my hat.