In my family growing up, "to frog" was a verb, and not a very pleasant one at that. Frogging was something that you wouldn't do in polite company, and certainly never in church. It was the kind of thing that I've been told British people never do, and the kind of thing our family dog seemed to do all the time. She was a Boxer - apparently they're known for it.

In any event, when I first began knitting, I marveled at the number of references to "frogging" a project. What could this mean? If it meant what I thought it meant, how was it even logistically possible? Growing up I'd heard stories of people trying to light these things (never seemed like a good idea to me), but never before heard anything about this mysterious nexus between knitting and flatulence. I was flummoxed.

Later, of course, I learned that "frogging" in the knitting context simply meant to rip something out and start over.

Still, frogging is something I'm loathe to do in public. To me, there's a bit of a feeling of failure involved. If I'm going to admit defeat, I prefer to do that in private. With that in mind, I typically rip things out late at night, when the entire TSMK household is asleep.

All of this is a long way of saying that I've again ripped out the Victorian Lace pattern with the error (http://thestraightmaleknitter.blogspot.com/2009/08/to-rip-or-not-to-rip.html) and started over. A few readers suggested that if I didn't do this, my eye would be drawn to the error immediately, every time I looked at the finished piece. Those readers were right, of course. Although I'd secretly hoped that someone in the ether would agree with Mrs. TSMK and tell me that I'd never notice the error once it was finished - not a single person echoed her sentiment. 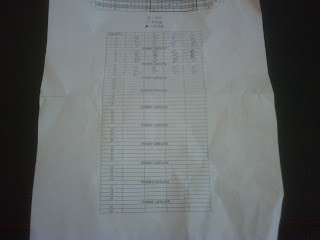 This time, I'm trying to convince myself to use lifelines. I typically prepare a brief chart that I can use to check off my rows. For lace patterns, I like this approach because it lets me see not only which row I'm on, but also which repeat. For this pattern, I've included a reference to lifelines in the chart. We'll see if I have the discipline to follow my own instructions.


So far, using the lifelines has helped. I'm a few hours into re-knitting the shawl, and so far everything is going according to plan. 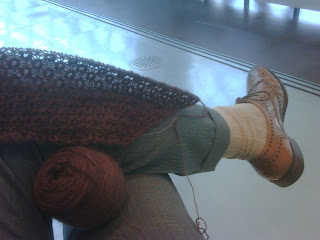