Honestly, I thought I had a shot.

But it wasn't to be.

I'd like to think I got at least a few votes.  Maybe even that it was close, and I just lost by a cardinal or two.  But of course since they burn the ballots, I guess we'll never know for sure. 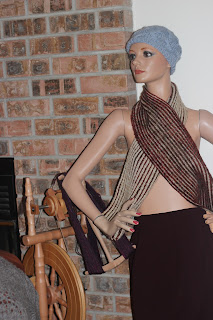 Luckily, I've got a plan for consoling myself.  You see, I've been hoping for some time to find a new companion.  Someone who is a good listener.  Who doesn't argue.  Maybe even someone who doesn't openly object when I spout nonsense.  After all, if I'd gotten the job I'd be infallible - that would've been fun.  And since I didn't get the job, I'm still plenty fallible.  But now I've found someone who doesn't seem to notice.

Here she is.  Isn't she lovely?  She was needing a new home, and being of a charitable disposition I thought it was only appropriate that I offer her space in my home.  To take off the chill of the evening, I'm letting her borrow my Winter of 2012/2013 scarf - done in Malabrigo worsted.  I hadn't tried brioche stitch before.  Love the result.  Didn't particularly enjoy the knitting as it seemed to take a long time to finish - what with knitting every row twice.  Mrs. TSMK was kind enough to lend a hat I'd made her for Christmas - but also insisted that she be somewhat decent and put on a skirt.

I haven't decided what to name my new ladyfriend yet.  If you have an idea for a good name, shoot me an email at the address to the right of this post with your suggestion.  I'll take suggestions until the end of March - and then announce her new name at that time.  To the winner goes the prize: a skein or two of my new favorite yarn.