About 15 years ago, I worked for a short while delivering pizzas. It wasn't really a job I wanted, but seeing as I was a college student, every little bit of extra cash helped. Plus, at the end of an evening I could consistently plan on bringing pizza back to my apartment. The pizza would be breakfast, lunch and dinner over the next day or two, helping stretch my food budget that much farther. Since I loved pizza - that last bit seemed like a win-win.

The place was called Road Dogy's Pizza, and I think it has since gone out of business. It wasn't the best pizza in the world, but for a little bit extra they'd also sell you a pie with just the crust and cheeze [Note - cheese : cheeze :: diamond : cubic zirconia], with garlic butter and marinara dipping sauces. For some reason I've always been a sucker for food you dip - a proclivity which I suspect started with Lik-m-Aid candy as a child - and am therefore incapable of resisting cheeze bread with any kind of dipping sauce. 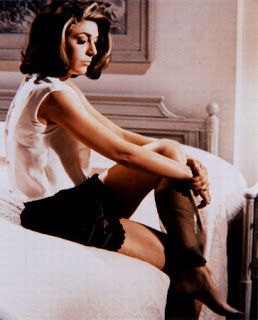 By the end of about a month of doing this, my girlfriend (now Mrs. TSMK) began to complain that my car smelled strongly of pepperoni and other assorted toppings. She was right. And, although pizza delivery was actually more lucrative than I'd expected, I'd already had one uncomfortable run-in with a drunken and chain-smoking woman in her late 50s, wearing a negligee and asking me to step inside for my tip. I've always enjoyed The Graduate, but this lady was no Anne Bancroft. In short, I was beginning to tire of the glamorous world of the pizza delivery driver.

The Dunkin' Donuts was open 24 hours, whereas we closed our doors at 2:00 a.m. As a gesture of good will, and in recognition of the close kinship we shared as purveyors of late night and early morning artery-clogging sustenance to the local student, trucker and/or marijuana-user population, we began to arrange an evening exchange. We would make an extra pizza or two, and deliver it to our friends next door. In return, they would give us a few dozen donuts, which we would split among us as we headed for home. From that day on, I would go home from work not only with a pizza, but also with 6-12 donuts.

The sad fact is that my life hasn't been the same since. I only worked at Road Dogy's for about six months, and the pizza/donut combo diet was only a part of my world for approximately half of that time. But I gained over 35 pounds as a Road Dogy's employee - and over the ensuing decade and a half, I've never quite gotten rid of all the weight.

All this is a long way of saying, you should never try to eat something bigger than your head. At least not in one sitting. It should go without saying, but people frequently forget.

We have a tradition at my office of taking our summer law clerks out to one last lunch toward the end of the summer. Each of them is informed of the amount that the firm covers for reimbursement of summer-clerk lunches, and is then put to work in a contest to see who (if anyone) can eat enough food to actually go over the reimbursement limit. This is, of course, made more difficult by the fact that we take them to Red Robin. As often as not, someone ends up leaving the table to be sick. 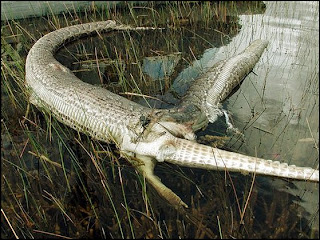 Animals forget as well. Who hasn't seen the news article of the Burmese Python found dead in the Everglades after ill-advisely attempting to swallow an alligator. Here at home, we had a similar episode in Mrs. TSMK's fish tank, when our resident Cyphotilapia Frontosa male of approximately 6 inches in length made an attempt to swallow a Neolamprologus Leleupi of the same length. I walked in to the surreal site of seeing 3 inches of south-bound Leleupi sticking out of the mouth of a north-bound Frontosa. Odd. Odder still to see said Frontosa give up, release his grip, and the Leleupi wriggle out and swim away like nothing had happened. Sure, she was missing a few scales, but she's since gone on to successfully spawn in the tank on two occasions.

Fish can be strange creatures, and their willingness to eat anything and everything (unless you're trying to catch them of course, in which they feign anorexia with ease) is a source of constant amazement. It is also a source of knitting inspiration, as with Thelma Egberts' wonderful Fish Hat [dead or alive?] pattern, featured in Knitty last winter. I've just completed one for each of the two older boys. The younger fellow's hat most closely follows the pattern, although I played with the shaping of the fins a bit. The older fellow's hat diverges from the pattern in a number of areas, including the length of the fish, and the shaping of the tail and the fins. Plus, the striping of his hat follows the fibonacci sequence for no apparent reason. Here they are, although the discerning reader will note that the older guy has not yet learned the dangers of large appetites; his donut is bigger than his head.
~TSMK 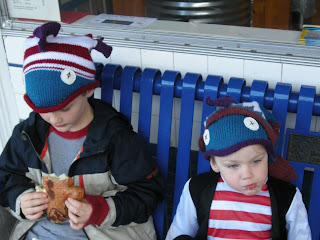 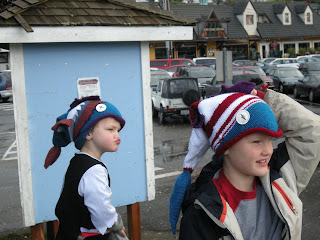 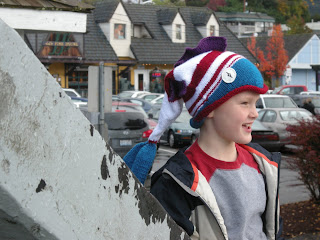 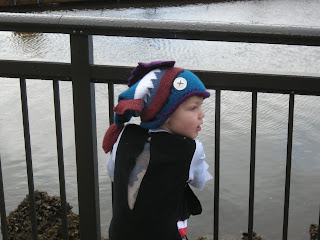